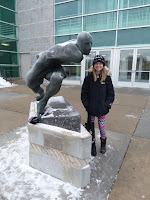 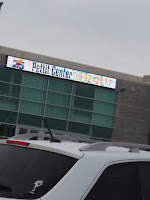 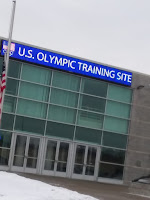 Our first trip to Milwaukee's Pettit Center made for a long day. My oldest daughter is a figure skater, she's been skating for 6 years now, and she had a competition there. We arrived around 8:30am, traffic on the way there was pretty decent for a Sunday morning. We missed the entrance and had to turn around to back track to it. If you've never been here, I suggest making the trip. This place is huge and is only 1 of 2 rinks in the United States that has an Olympic Speed Skate circle. In order to get to the locker rooms, after checking in at the main lobby, we had to go down 2 flights of stairs, now let me tell you, there are a lot of stairs here, (good thing there's an elevator for those who need it). Now that we found the locker rooms, we had to find how to get my daughter to the ice and how we get to the bleachers. After making our way through a huge set of doors, we came to 2 sets of stairs, by now I felt a bit like Alice in Wonderland, deciding whether to drink the potion or eat the cupcake. One set of stairs was red for the skaters to take to the ice, the other was blue for the spectators to get to the bleachers. Since my daughter skated twice that day, we were up and down those stairs quite a bit, not to mention all the other stairs we had to climb. In order to get to awards, we had to go back out the doors, and go up several flight of stairs to the third floor. My daughter took 2nd place and 5th place that day which she was okay with. The Pettit Center also houses the Hall of Fame, several famous athletes had skated here. Now I mentioned before there was a speed skate circle here, that surrounds 2 ice rinks and on the outside of that was a running/walking track. Not only was there a figure skating competition going on this day, there was also a hockey game and speed skating, and open skate, not to mention all the others who were using the track. It was a long, exhausting day but we will definitely be back for the next competition. :)